We develop the materials of the future through innovative conception, sophisticated macromolecular engineering and strong collaborative enterprises.

The Polymer Science Group is involved in the following research areas.

Monolayers are thin films of amphiphilic molecules, which sit at the water/air interface. They offer several advantageous properties such as self-spreading across the water surface and biodegradability, while only requiring small amounts. The Polymer Science Group (PSG) is investigating the use of these films for water evaporation control.

Water loss from farm dams and storages is a significant concern. More than 1320 gigalitres of water from on-farm storages evaporate each year. This is the greatest loss of water from Australian cotton farms. For example, the cotton industry has an average evaporation loss of 25%, with some storages seeing evaporation losses as high as 45%. The economic impact of reducing even 35% of these losses would result in savings of $23,400 per hectare over a 15-year period by reducing the amount of water purchased to make up losses. There are many technologies to reduce water evaporation, such as physical covers, however these technologies typically have high capital costs and are limited to smaller storages.

The PSG has been working on this technology for several years with several field trials on water storages, as large as 5 ha. The team recently completed a three-year project as part of the Smarter Irrigation for Profit 2 <https://smarterirrigation.com.au/> where they were researching ways to reduce the impact of wind on monolayer performance. During this project the technology was tested on sections of irrigation channel in NSW and on farm dams located at the University of Melbourne - Dookie campus where the technology showed significant reductions in water evaporation. 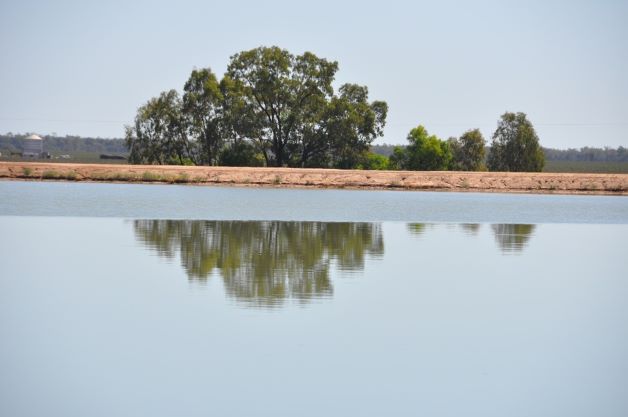 Millions of people globally suffer from corneal­ blindness. Partial cornea transplant surgery known as Descemet’s Membrane Epithelium Keratoplasty (DMEK) is the treatment currently delivering the best results for improved vision. However, the procedure is highly challenging, leading to greater uptake of total corneal transplants, despite poorer patient outcomes. Working with the Centre for Eye Research Australia (CERA) and a US based eyebank, Eversight, the Polymer Science Group has engineered a solution to simplify corneal endothelium transplants and to improve surgical prospects for patients worldwide. Drawing on our previous patented technology we have developed a purely synthetic, non-toxic, yet biodegradable, hydrogel scaffold that can support the delicate Descemet’s Membrane required for effective DMEK surgery. The hydrogel scaffold known as Hygelix™ has the strength and nutrient flow properties comparable to human cornea and completely dissolves in vivo over several weeks. The benefits of this technology are shorter surgery times, with faster patient recovery times and improved visual outcomes.

This research is currently being funded by the DJPR’s Victorian Medical Acceleration Fund (VMRAF) and will result in the Hygelix™ system being ready for pre-clinical human trials.

Further information can be found in a recent research article entitled "A new technology to improve outcomes for corneal transplant patients".

Australia’s leaders in corneal bioengineering have collaborated to form BIENCO, a consortium of six leading institutions brought together to develop a bioengineered total cornea to treat corneal blindness. The tissue engineered total cornea will contain all components of the human cornea encompassing the epithelium, stromal and endothelium layers. The Polymer Science Group as part of the BIENCO consortium is charged with developing functionalized hydrogel scaffolds with the required strength, clarity, biodegradability and biocompatibility to support the total cornea formation. The technology, based on the patented polymer hydrogel scaffolds have been further developed to enable compatibility with the endothelium and epithelium components of each layer and to act as a tissue engineered support for both sections of the cornea. The properties of the hydrogels are crucial for their incorporation into the total synthetic cornea which include biocompatibility, strength, non-toxicity, biodegradability, clarity, and the ability to transport fluids and nutrients crucial for eye health. The functionalised hydrogels can be tuned to optimise these properties by utilizing targeted synthetic strategies and   adjustments in material formulations. 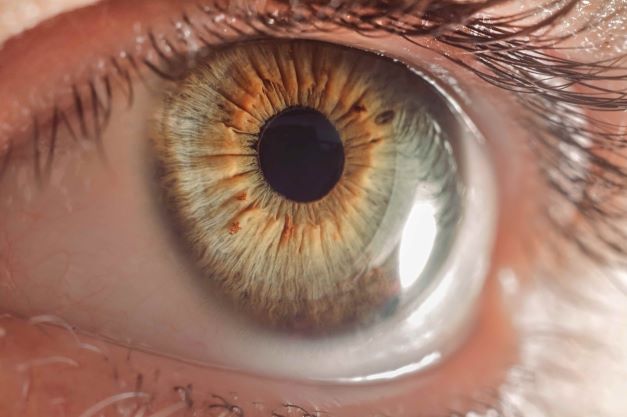 The emergence of automation tools in the last century has revolutionised the development of materials, particularly for medical applications. The field of material science is realising the benefit of automation for a fast-tracked production and evaluation of novel materials for various applications. In the field of polymer chemistry, we need to focus on automation to access well-defined macromolecules capable of exhibiting different properties.

Our team focuses on the automation and rapid evaluation of polymerisation techniques that offer accuracy of design and exquisite control and precision of the polymer structures.

The automated platforms developed in our research laboratory can in the future be used to produce large databases of polymer libraries with in-line characterisation to assist in the enhancement of machine learning algorithms for the design of novel polymers.

One of the areas of focus in PSG is engineering bio interfaces by the development of peptide-functionalized non/low-fouling polymers to study the interplay between physicochemical and biological cues and their biomedical application. In this regard, the PSG is collaborating with the Tissue Engineering Group of the University of Melbourne to designed and developed blood-compatible biomaterials for application in small-diameter vascular grafts. Using reversible addition-fragmentation chain transfer (RAFT) polymerization and specific functionalization with cell surface binding peptides derived from extracellular proteins, we also introduced a biomimetic non-fouling biomaterial based on comb copolymer of methyl methacrylate/PEG-methacrylate presenting arrays of different types of adhesive ligands nanoclusters. This bio interface could improve endothelialization and showed cell scavenging properties under shear flow conditions. Currently, an ongoing project is being carried out on using this system for muscle tissue engineering. 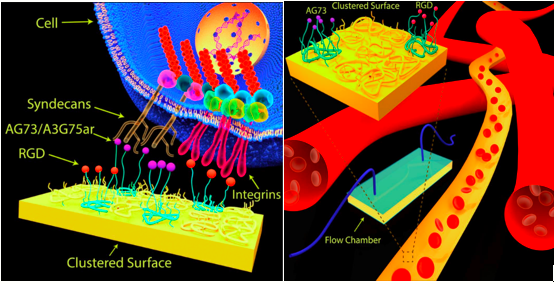 Climate change due to anthropogenic carbon dioxide emissions (e.g., combustion of fossil fuels) represents one of the most profound environmental challenges of this century. Equipping power plants with carbon capture and storage (CCS) technology has the potential to reduce current worldwide CO2 emissions. Membrane-based CO2 separation is an attractive technology that meets many of the requirements for energy-efficient industrial carbon capture. Within this domain, ultrathin-film composite (UTFC) membranes are promising, providing high gas permeance in comparison with conventional thicker (∼50 μm) dense membranes. We study the development of each layer within the multilayered membrane structure, particularly a gutter layer (= intermediate layer) which has an important role in determining the gas permeable performance while maintaining gas-specific selectivity. The current projects are mainly focused on the development of novel materials and an in-depth study in the chemistry of membrane fabrication. One of the promising techniques that we have developed is a continuous assembly of a polymer (CAP) for membrane fabrication. Different polymerisations such as atom transfer radical polymerisation (ATRP), reversible addition-fragmentation chain-transfer (RAFT) polymerisation, and ring-opening polymerisation (ROP) can be applied for precise controlled chemistry when producing new membrane materials.

Developing an anti-microbial surface which is non-toxic to mammalian cells or the environment, while not leading to evolved anti-microbial resistance is of considerable interest. This will be a benefit to public health, especially in light of the pandemics and anti-microbial resistance crisis. In 2016, we reported the break-through discovery of structurally nanoengineered antimicrobial peptide polymers (SNAPPs), which are star-shaped peptides with high killing power against Gram-negative bacteria species, including ESKAPE pathogens responsible for deadly infections. Our study provided the first report of a synthetic polypeptide with high efficacy in vivo in a mice model challenged with a colistin and multi-drug resistant A. baumannii bacterial infection. The mice treated with SNAPP16 had signiﬁcantly decreased bacteria counts in the blood, spleen and at the initial site of injection, the peritoneal cavity, compared to control groups. Our group is currently focused on engineering an anti-microbial surface through grafting N-carboxyanhydride derived polypeptide onto the substrate. Our group is developing the polypeptide film on substrates and the investigation on anti-microbial activity is via a collaboration with the Melbourne Dental School. Such anti-microbial surfaces will have significant potential in translational application, which can be used in hospitals, biomedical devices as well as clinical implants. 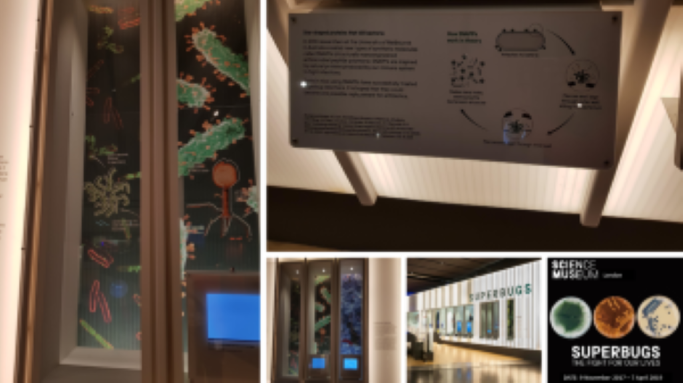 Ice build-up on solid surfaces, such as aircraft, pose a serious safety hazard and can lead to significant economic losses for a range of industries. One solution to this problem is the development of icephobic coatings. Future advancement of icephobic coatings relies on new synthetic building blocks and methods that enable added functionality, while minimising the environmental impacts and costs. The PSG anti-icing project aims to develop a novel surface modification technique that can be used for a range of industrial applications.  Modification of a metal surface influences the surface properties and performance in terms of icephobicity. Structure/property investigations will probe the effect of molecular weight, reactant ratios, functional groups, and cross-linking density. A range of novel polymerization and surface modification techniques and polymer/surface characterisation techniques are utilized at our group and our collaborators’ laboratories to fabricate functional coatings for real industry applications.